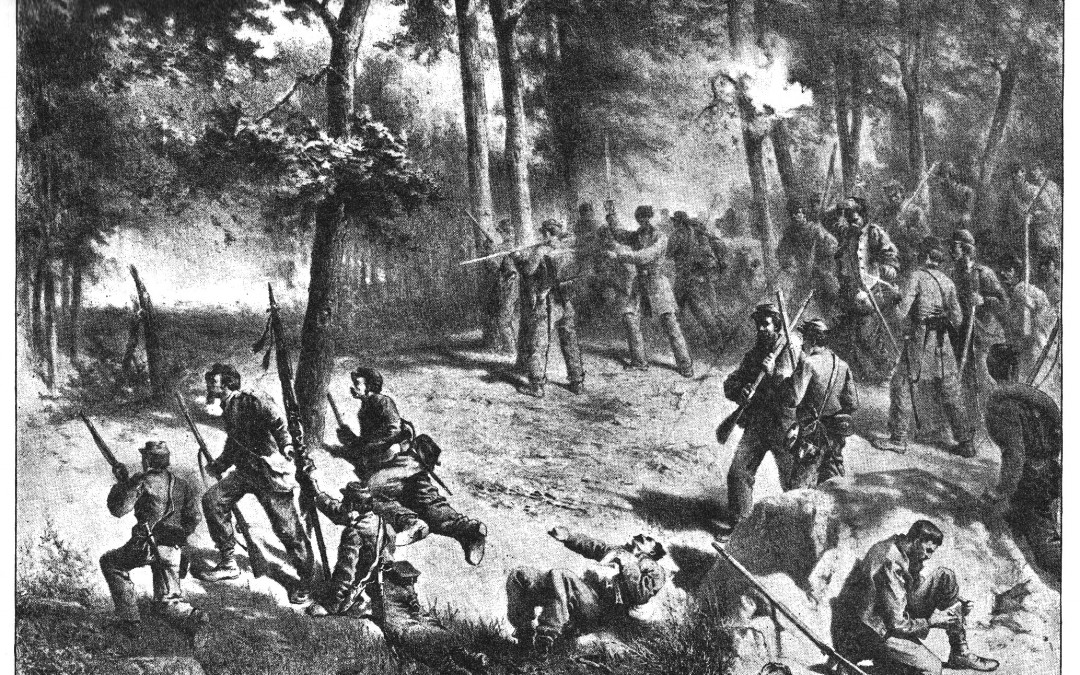 The new days dawn slips across the battlefield pursuing a fleeing darkness. And it is a dawn which reveals the terrifying cost of the day of battle before.

The fields and town streets of the small Pennsylvania hamlet are strewn with the dead, while the crows peck, and feast, and the lone stray dog, or even feral hog, slink among the fallen.

The dying, calling from parched and raw throats for water, beg for aid. Far too many are mere boys, in blue or gray, lying about like bloody, broken dolls, carelessly thrown askew. It is a piteous agony of broken hearts within broken bodies, that beg for but one last moment of human compassion before their eyes close forever, each one, a son.

It is the remnants of the terrible, swift, scythe of the reaper which has left more than 9,000 Union casualties, and 6,000 Confederate.

Now, upon the 2nd Day of July, Union and Confederate Armies lay well entrenched, bloodied, and hungry for more. They’ve come too far, in blood and distance, to walk away now.

Each and every man, upon either side, is ready to finish it.

Yesterday, the martial arm of Lee struck the Union right, crumpled it, and sent it recoiling in defeat. But costly mistakes were made which did not seal the success, as victorious Confederates marched across the field. They were mistakes paid in blood like those of Iverson’s men, ordered to wheel right exposing their left to hidden Yankee’s carefully concealed behind a stone wall.

Men in Union blue rose in ambush and opened fire from less than one hundred yards.

800 North Carolinians were felled like corn, their bodies laying neatly where they fell, perfectly in march step.

But today, Lee will strike the Union’s left, and it is Longstreet’s Corps that will make the attack.

Their goal is to sweep the left flank of the Union anchored near a place called Little Round Top. It is believed the Round Top is largely unoccupied. If the rebels can sweep the flank, drive it in, and seize the heights, they can place their cannon upon it, offering a rain of fire upon the entire Union line.

The battle will be won, and perhaps, even the war. For a devastating rebel victory in the north could very well secure it.  And with Lee’s rebel army completely uncontested Philadelphia, Washington, Baltimore, or even New York will lay open in its path.

But Meade is wary, and with capable veteran advisement prepares wisely for just such an assault.

The attack will come as no surprise to him.

But the ferocity of rebel fury will.

At 4:30 pm, the attack steps off. Leading the attack are the shock troops of the Confederacy, John Bell Hood’s Texas Brigade, ready to smash the Union line.

Almost immediately chaos descends upon the field, fracturing the plans of commanders both North and South.

John Bell Hood, the charismatic General gallantly ahead upon his horse is struck down by cannon fire and carried from the field. And his Texas Brigade is without his leadership.

But still they march bravely forward, and into a deadly complication.

Unseen Union sharpshooters combine with rough terrain and confused Confederate officers lead some regiments to the left and some to the right. And the brigade begins to drift steadily apart.

Those to the right march headlong up the Round Top and into a waiting engagement of the courageous men of the 20th Maine under the undaunted command of Colonel Lawrence Chamberlain.

The struggle for the hill devolves quickly into a blood drenched contest of will and spite as Men of Maine and New York valiantly defend the uphill charges of men of Texas and Alabama.  Seven times they charge, and seven times they are driven back, but not until they’ve drawn the last full measure of strength from the Maine men. Rifles empty, and and their last hope gone, they give all that they have left and counter charge in a desperate bid for survival. Their gallantry buys them victory with exhausted rebel prisoners.

But not before each side has anted up toward the butcher’s bill upon the slopes of their own stretch of battlefield.

And further down the field, to the right of the Round Tops, the rest of Longstreet’s attack is only just beginning.

The remainder of the Texas Brigade, the men of the 1st Texas, and 3rd Arkansas Infantry are heading straight into hell, the Devil’s Den, and entrenched New York Volunteers. Arkansas and Texas men with a rebel yell ripping from their lungs rush headlong into the smoke filled, twisted rat ways of the boulder strewn ground. And like fleet footed demons coming home they tear into the Union defenders, making the rock filled warrens their home. The men of New York retreat, rally, and rush the rat way again but are thrown back. Again they retreat, again they rally and again they charge, but to little avail. And in one of the most ferocious displays of American tenacity the Texans and Arkansans hold on. Double flanked, attacked from three sides, with cannon shot from the Round Top raining down upon them, they hold, and remain till the end of their apocalyptic day, holding their field of battle.

But here there are no cowards, neither North or South, as Americans to a man, they answered the call of their countries. They fought, and flew their flags with honor, and in dignity they died.

Across blood spattered, crop crushed fields, clashing with steel, and musket, cannon and horse into the pages of history  they fought, struggled, and died.

The Wheat Field, Peach Orchard, Plum Run, and Valley of Death. All become place names, for the heroic and hallowed dead, sacred in memory for all American ages to come. It is a thing which haunts the mind and urges the writer forward, fingers dashing across the keyboard, anxious and driven in fever to record every man’s deeds. But it is an impossible task, for every act of courage, compassion and commitment of that day cannot be known. Only some, like the epic charge of the 1st Minnesota, men who gallantly ran forward in a desperate bid to break Anderson’s attack, and seize the day from exhausted, unrelenting Confederates. In the end they saved the Union line from disintegrating and stopped Longstreet’s attack, but not before a heart rending, and staggering loss, of 215 casualties, of 262 men, an 82% lost.

Ultimately the day will end in a stalemate, as Lee’s blow has failed, and the Union line holds.

The Union flanks are stricken, and desperately reinforced. And Lee believes it is in the center, where they are weakest. And it is there, on the morrow he will strike, and shatter them, once and for all.

The butcher’s bill for the day, paid in full, at Gettysburg.

In merely six hours of fighting.